The River Teign rises in boggy open moorland in central Dartmoor at a height of 520m (1700 feet) above sea level, within a short distance of the sources of four other Devon rivers: the Taw, Okement, Dart and Tavy.

From source to sea the course of the river is roughly an ‘S’ shape, initially flowing east, then turning to the south, and finally east again through its tidal estuary. 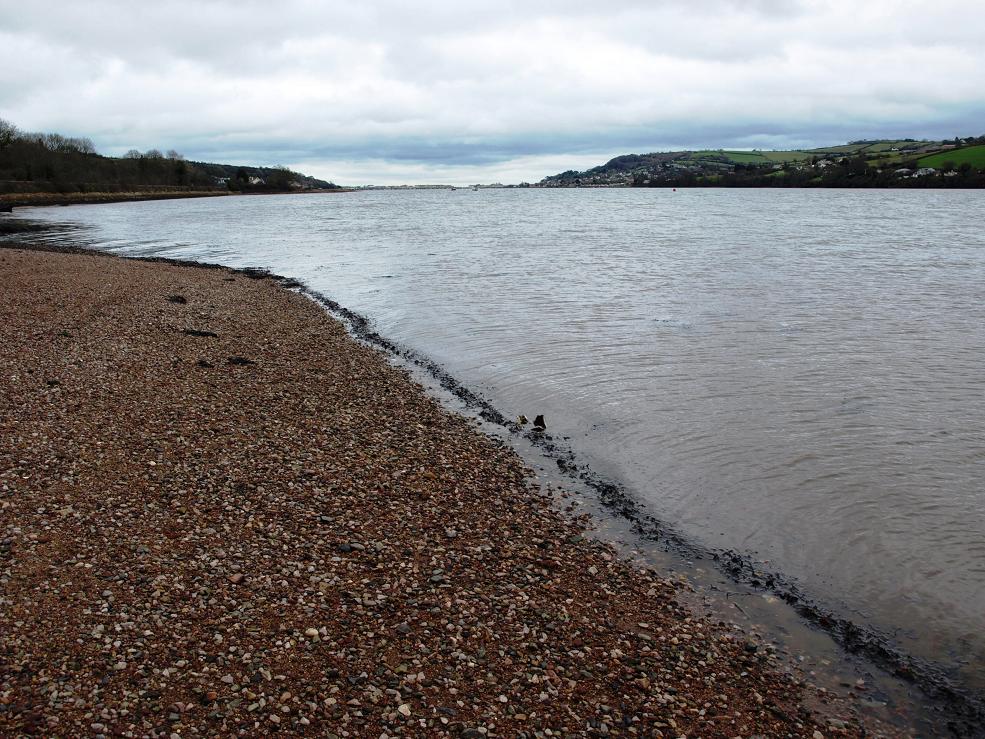 Its length is quoted variously as anywhere from 30 to 61 miles – presumably the lower figure being calculated by taking a straight line through its course (as the crow or seagull flies), and the higher figure allowing for every turn in the river’s channel.  The area of the catchment is 550 square kilometres, which is around 8% of Devon. It stretches from the A30 trunk road in the north to the northern edge of Torquay in the south, and from Hangingstone Hill and Rippon Tor on Dartmoor in the west, to the Haldon Hills and Teignmouth in the east.

The South Teign, which is dammed to feed the Fernworthy Reservoir, flows on from the reservoir to join the larger North Teign near Leigh Bridge. 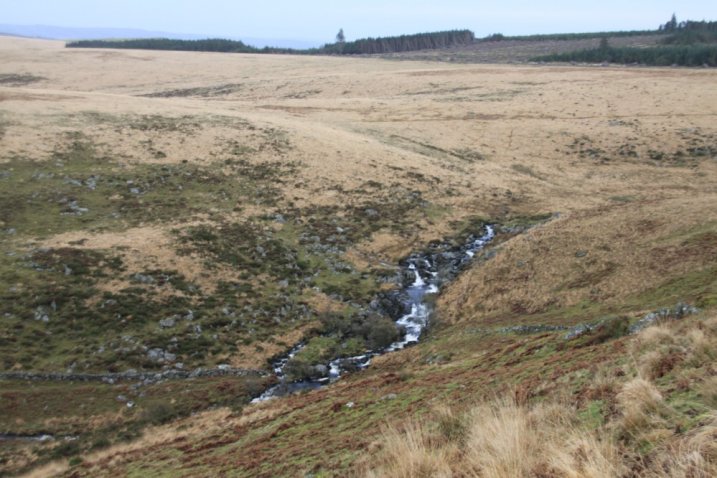 Once the young Teign leaves the open moorland behind it appears to have reached its valley stage soon afterwards, by the time it gets to Chagford. 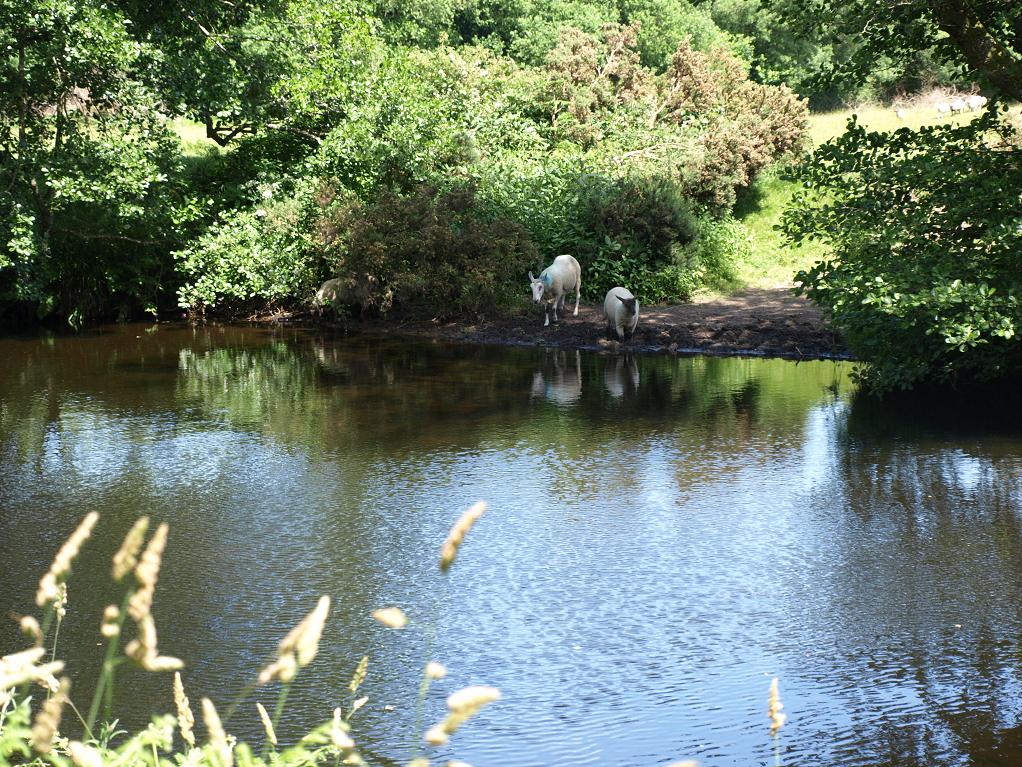 But instead, about two miles downstream from Chagford Bridge it enters a steep gorge, skirting the northern side of the moor, and is hidden from view by dense woodland on each side for six miles. 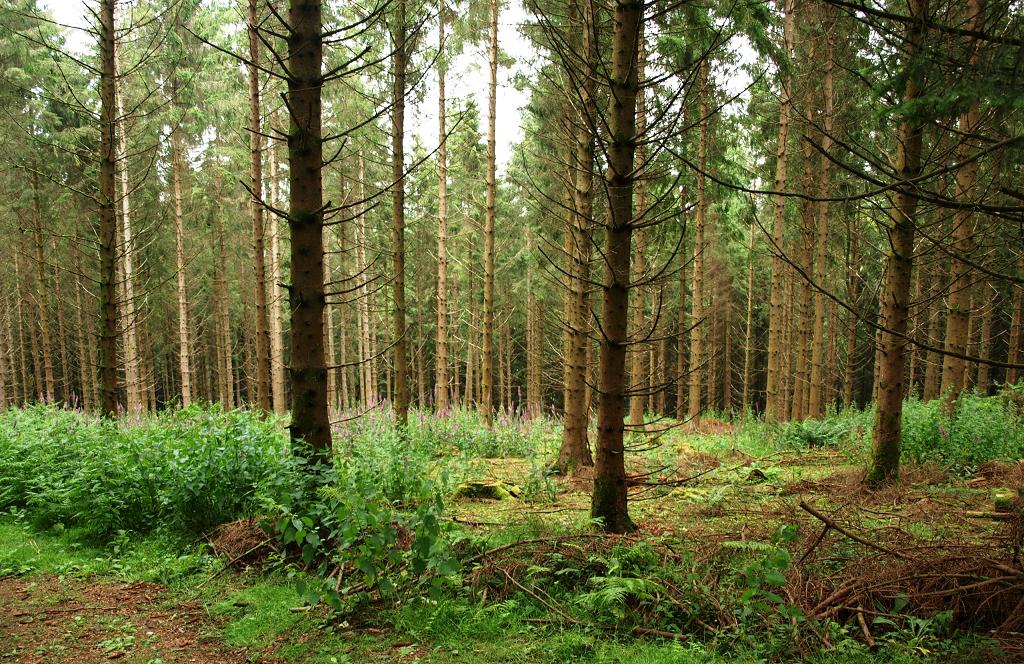 This sequence of topography is unusual – when still flowing over Dartmoor granite west of Chagford the river meanders, creating a flood plain with alluvial deposits. Then further downstream it crosses a geological boundary caused by a fault line separating the main Dartmoor granite intrusion from an area of rock surrounding the intrusion known as a metamorphic aureole – rocks which have been altered by contact with the igneous intrusion, but differing from it in composition, structure, or texture. The different nature of the rock beyond this boundary has prevented the river continuing to erode it and instead it is constrained within a steep sided valley. 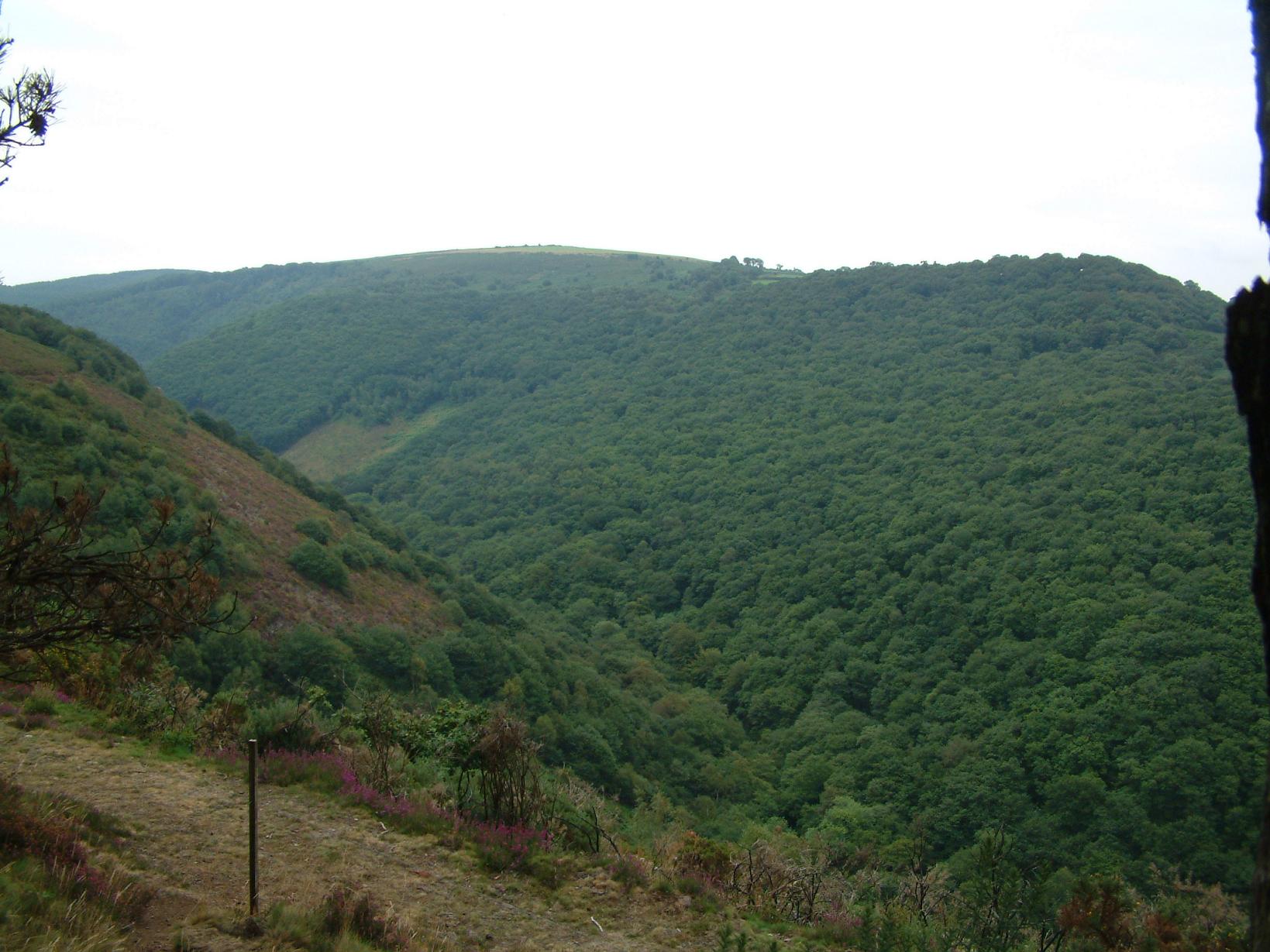 The Teign Gorge from the grounds of Castle Drogo (July 2004)

The river emerges from the gorge at Steps Bridge and turns southwards near Dunsford to pass through a broad valley of pasture land at the east edge of Dartmoor, with the villages of Christow and Trusham set on slopes high above the river. This section, from Dunsford to Chudleigh, is commonly referred to as ‘the Teign Valley’, as it is the most accessible stretch of the river and resembles what most people would recognise as a typical English lowland river valley. 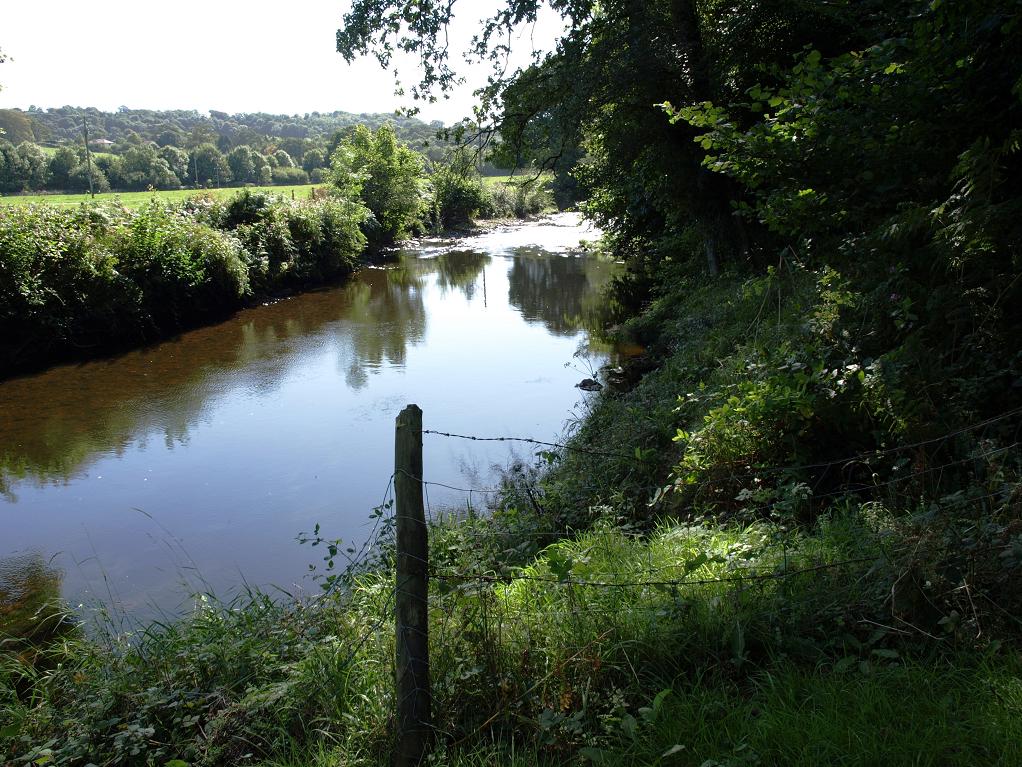 The Teign near Lyneham Farm (September 2009)

At Chudleigh Knighton the valley widens and the Teign is joined by the Bovey in a relatively flat area, ringed with hills. This is the Bovey Basin, known for its valuable deposits of ball clay. Open cast workings to extract the clay dominate this part of the valley, and extend right into the built-up area of Newton Abbot. 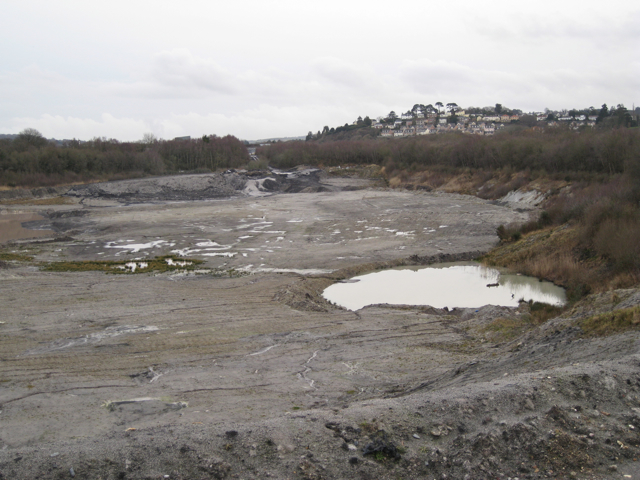 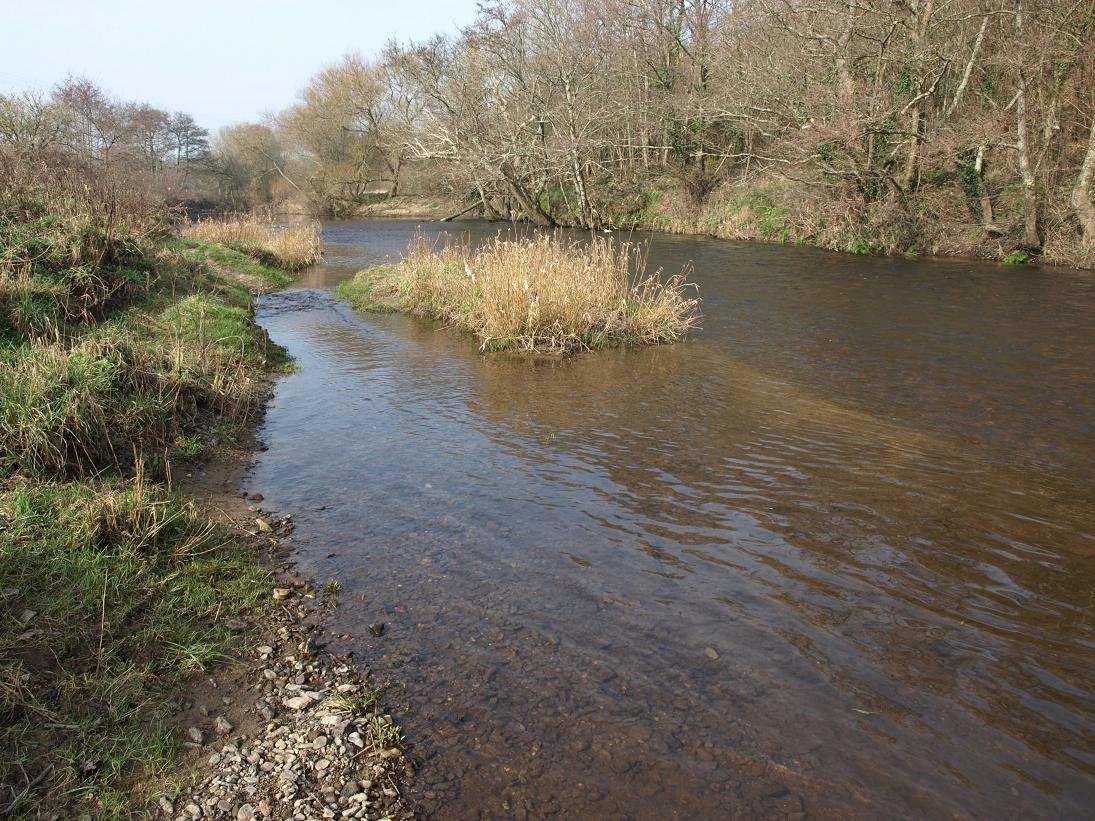 The river separates Newton Abbot from the ancient town of Kingsteignton. Beyond Newton Abbot the Teign enters a wide tidal estuary with mudflats that stretches 9 km to Teignmouth. The estuary, which appears to be disproportionately large for the size of the river flowing through it, is actually a ria or drowned valley caused by a relative rise in sea level following the last Ice Age, around 10,000 years ago. 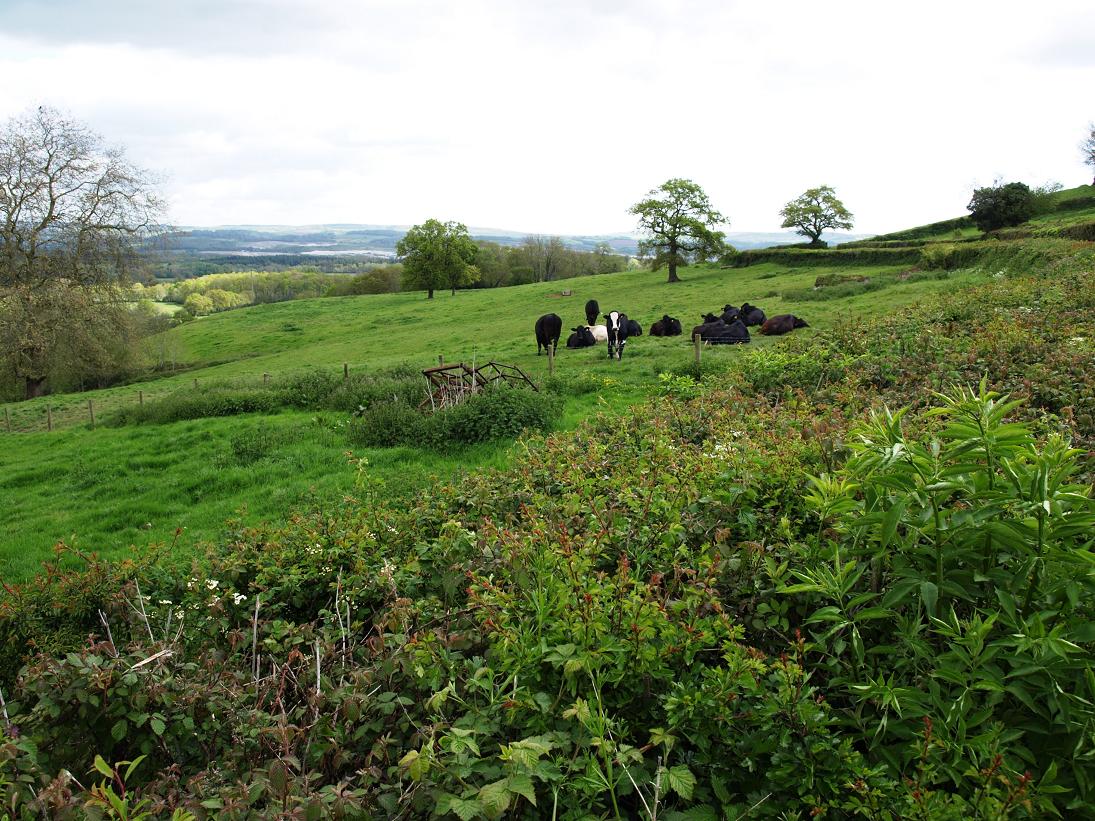 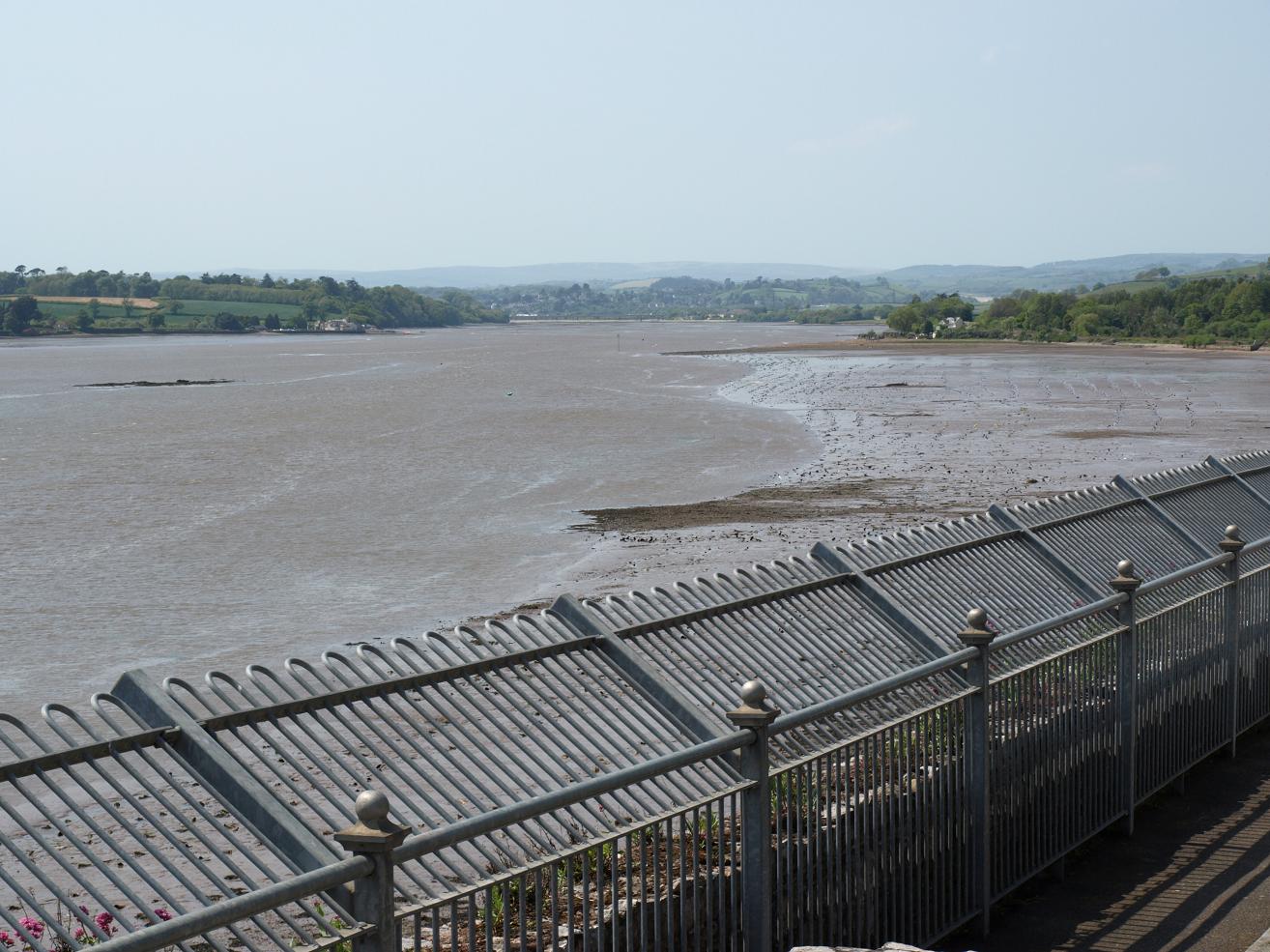 The Teign Estuary: looking upstream from the viewpoint on the A381 (May 2009)

At Teignmouth the river is diverted past a sand bar just before it joins the sea at a relatively narrow point, where there are strong, changeable currents. 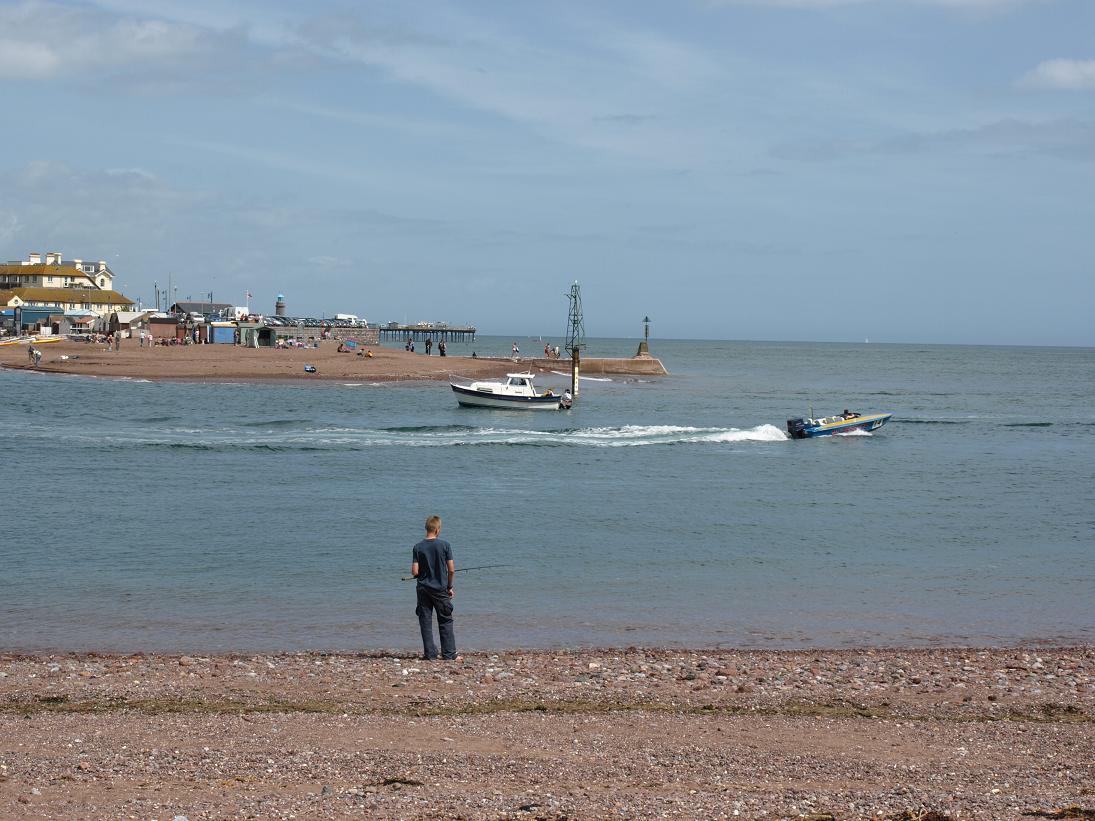 The estuary is gradually silting up due to increasingly intensive agriculture and urban development throughout the catchment, which have caused a greater volume of sediment to be washed down the river.  An Environment Agency report from 2011 notes that low pH values of the river water are the result of acidification from moorland runoff in the upper reaches, which means that fish populations are not as good as one might expect.  But farming practices are almost certainly another source of pollution: fertiliser and other agro-chemicals are washed off fields, slurry stores leak into water courses, and farm animals tramp their droppings into fish spawning areas.

However, fishing is still carried on. In the estuary mussels and oysters are harvested, it is a nursery for bass, good for flounders, and important for migratory fish. Bait is harvested by anglers – peeler/soft back crabs are collected and worms are dug from the mud. Salmon and sea trout are present in the wider river system, although their decline is a current source of concern, and common eels are found in the middle and lower reaches of the Teign. 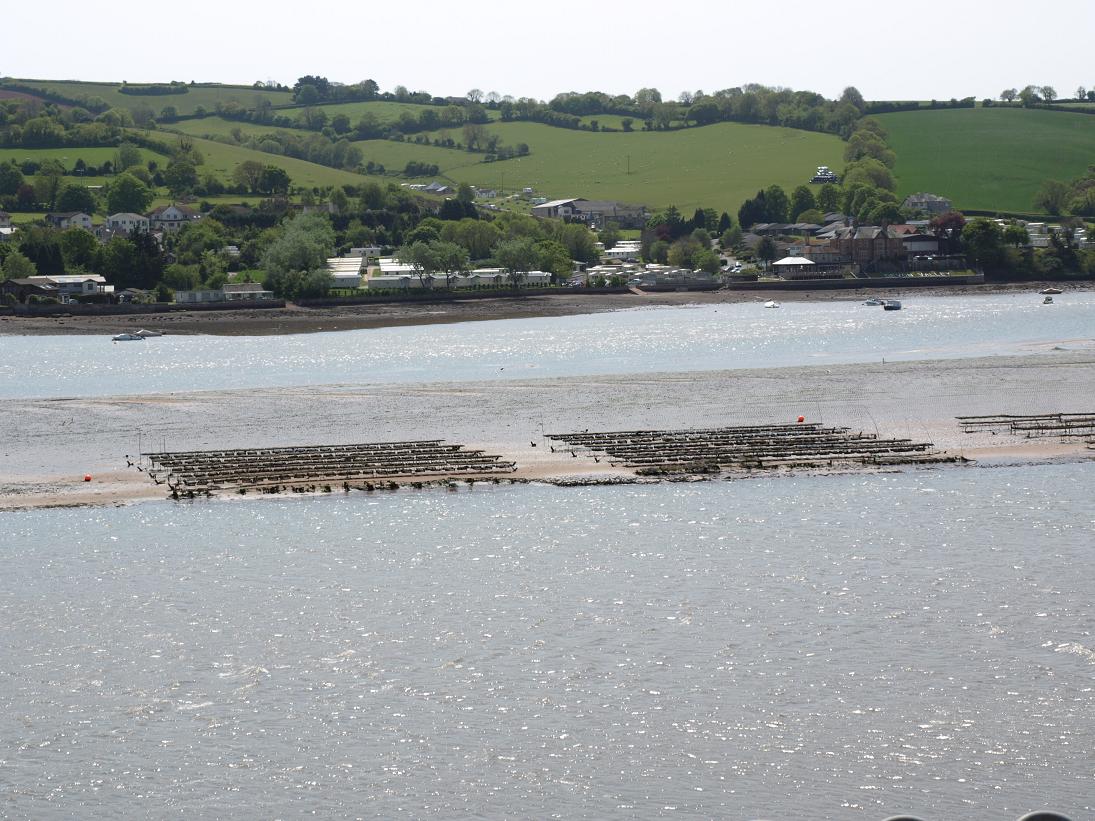 Oyster beds on mud flats in the Teign estuary (May 2009). The photo was taken from the viewpoint on the A381, looking across the river to the Devon Valley Holiday Village in Ringmore.

Birdlife includes herons, kingfishers, dippers, grey wagtails and mallards, as well as cormorants and goosanders. The heathland up river attracts the nightjar; the farmland has cirl buntings, woodlarks and skylarks. There are also dragonflies and rare water beetles, and otters are making a comeback.

The principal tributaries of the Teign are the Lemon, the Bovey and the Aller Brook.  The rough sketch map below shows the whole river system, apart from the estuary down to Newton Abbot and the area drained by the Aller Brook south of Newton Abbot. 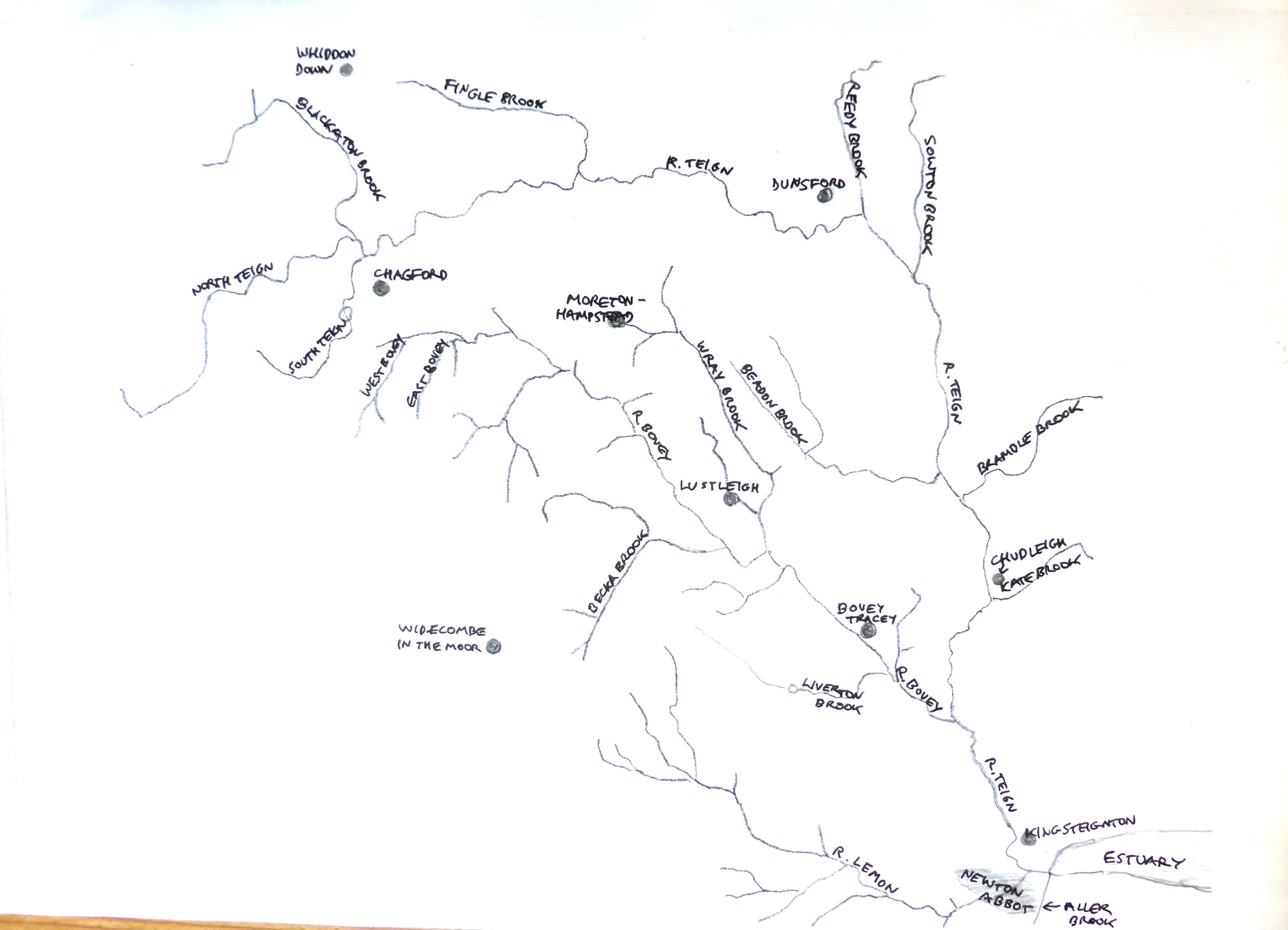 The Lemon rises in the hills east of Widecombe-in-the-Moor, flows through Bickington and on through the middle of Newton Abbot, and meets the Teign at Newton Abbot quay. 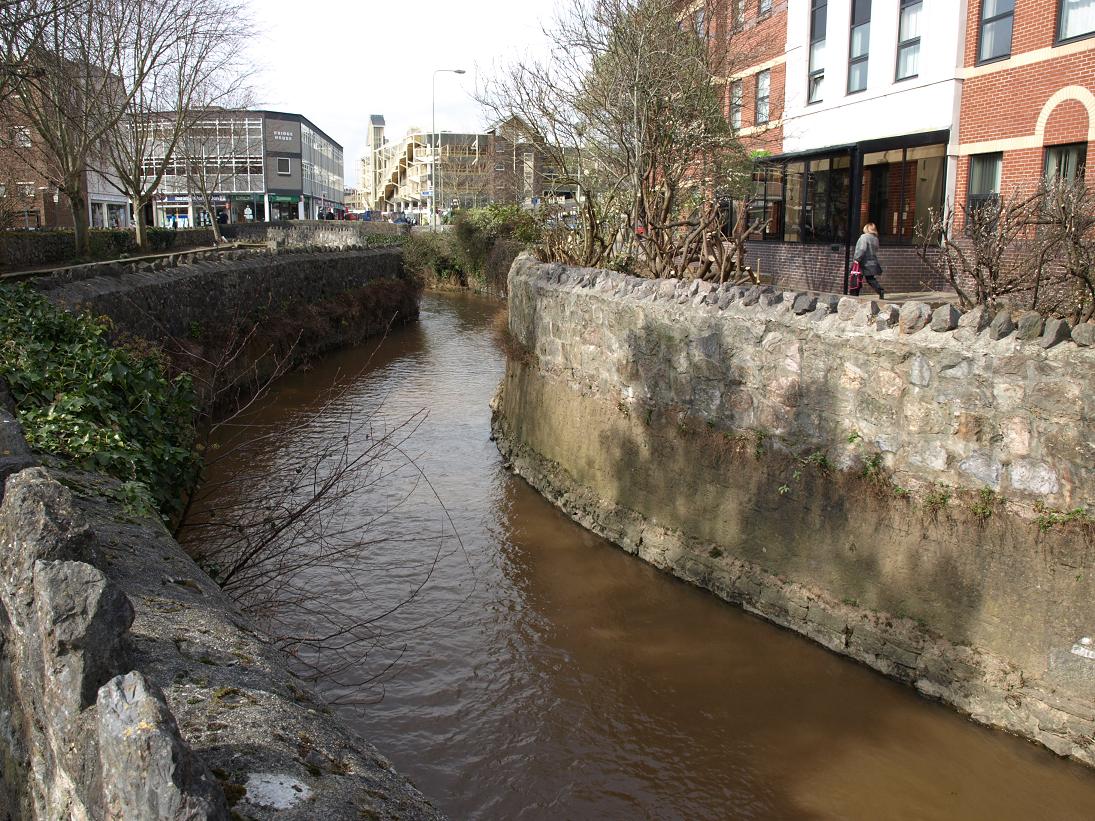 The river Lemon in Newton Abbot (March 2010). Within the town the river is contained within a narrow concrete channel, to reduce the risk of flooding – basically it’s just considered to be a nuisance, rather than an asset or an amenity, as it once was.

The source of the Bovey (at one time known as the West Teign) is on Chagford Common, not far from the source of the Teign itself. It flows past the village of North Bovey and then in a steep wooded valley below Trendlebere Down to Bovey Tracey. A few miles further on it joins the Teign between Heathfield and Teigngrace. 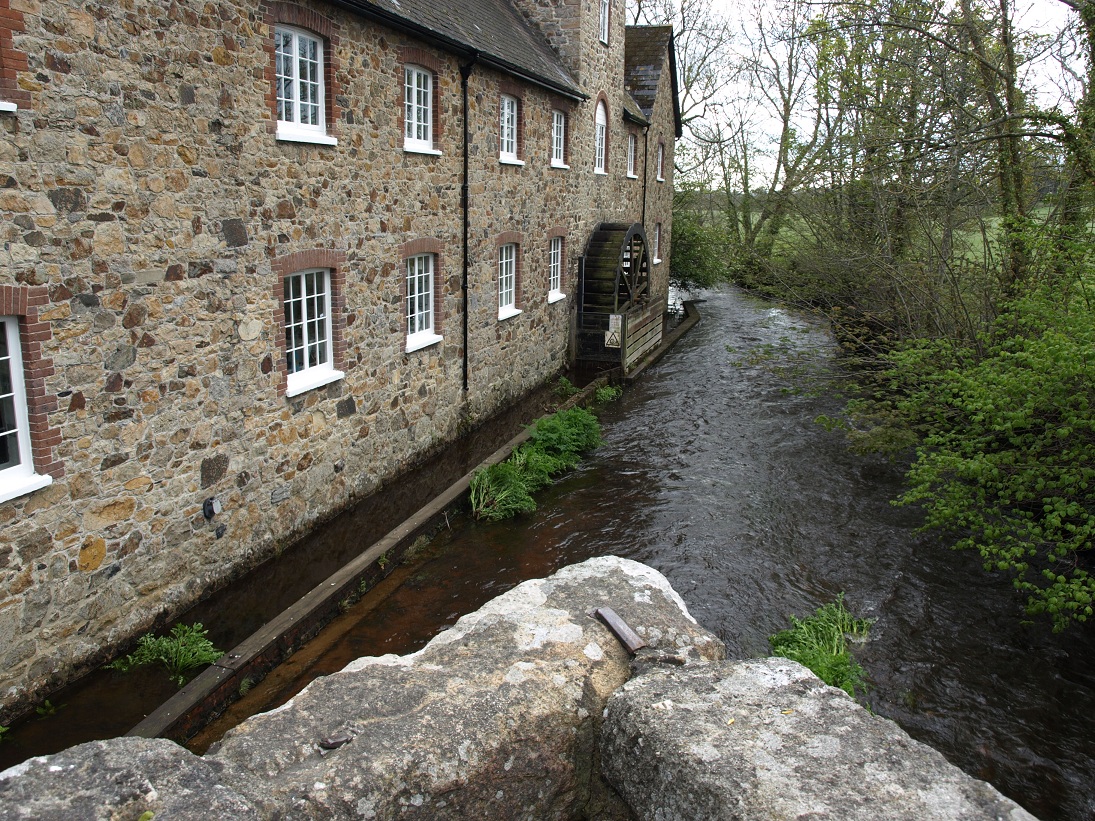 The river Bovey flowing past Riverside Mill in Bovey Tracey, home of the Devon Guild of Craftsmen gallery (March 2012) 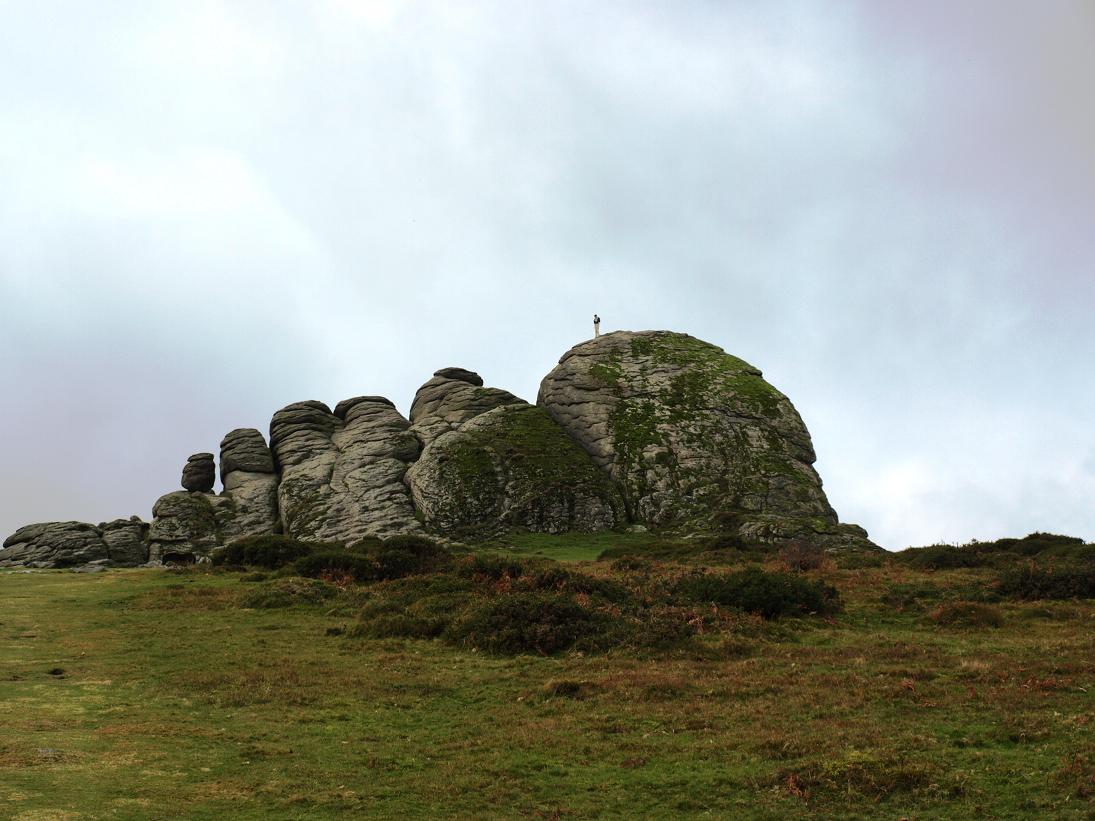 Haytor Rocks: visible from all around the area and a popular walking area next to the Bovey Tracey to Widecombe road. (January 2012).  The western slopes are drained by streams that flow into the River Bovey; the Lemon rises below the Rocks to the west.

The Aller Brook flows from the northern outskirts of Torquay to join the Teign just upstream of the A380 road bridge.  Given its location between two busy conurbations, away from the main roads its catchment area is surprisingly rural and quiet, with several attractive villages – although the construction of the Kingskerswell By-Pass, due for completion in late 2015, has created an ugly scar in the landscape and is currently very disruptive . 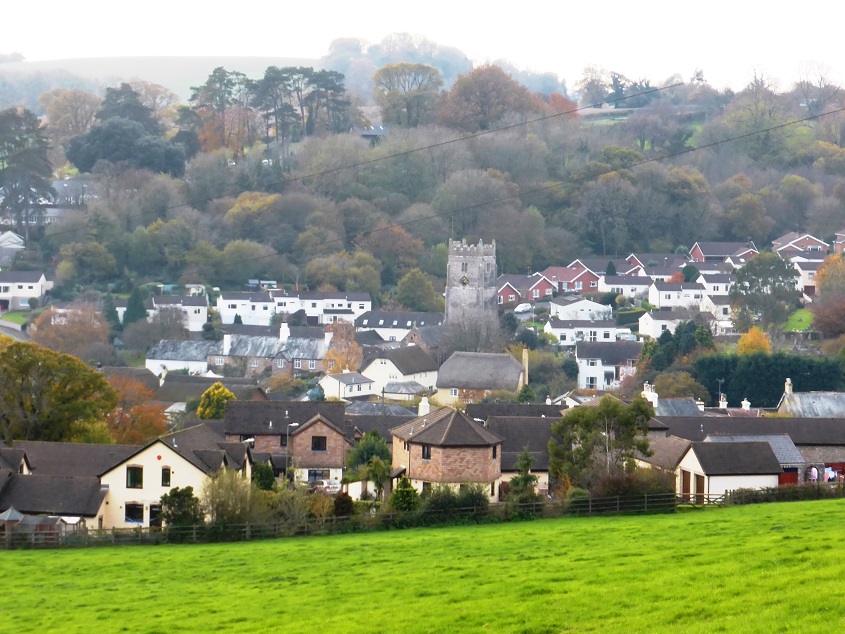 The centre of Abbotskerswell village (December 2013).

The main line railway from Exeter to Plymouth runs along the south bank of the estuary.

A main line train running along the northern bank of the river, on the western outskirts of Teignmouth (May 2011)

Until its closure in 1967 a branch line called the Teign Valley Railway ran close to the river from Christow to Newton Abbot. (This railway is discussed in a separate section of the website.) 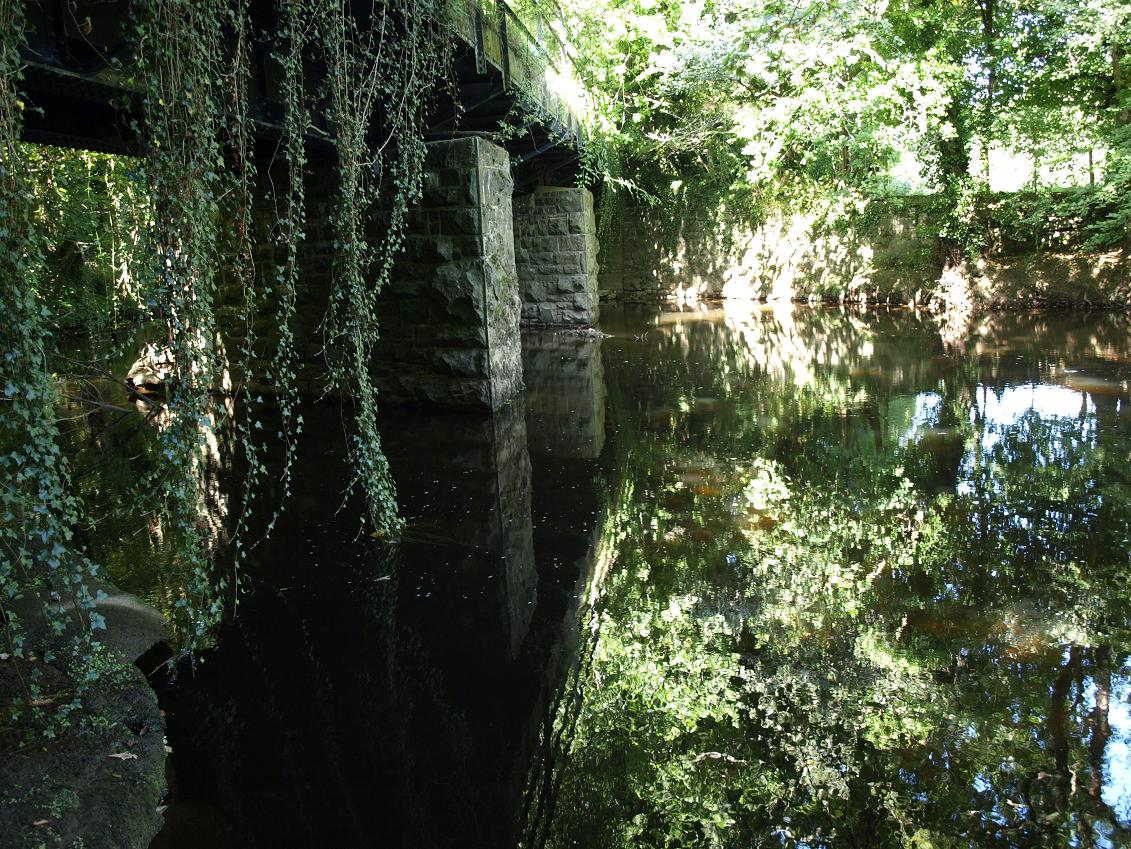 Crockham railway bridge over the Teign, disused since 1967. (September 2009)

At the source of the Teign the average annual rainfall is 2200mm per annum (about 88 inches), falling progressively – within only 30 km as the crow flies – to 900mm (about 36 inches) around the estuary. The catchment includes the towns of Newton Abbot, Kingsteignton, Teignmouth, Bovey Tracey, Chudleigh and Moretonhampstead, and several villages including Drewsteignton, Bishopsteignton, Lustleigh, Chagford, Dunsford, Shaldon, North Bovey and Denbury. 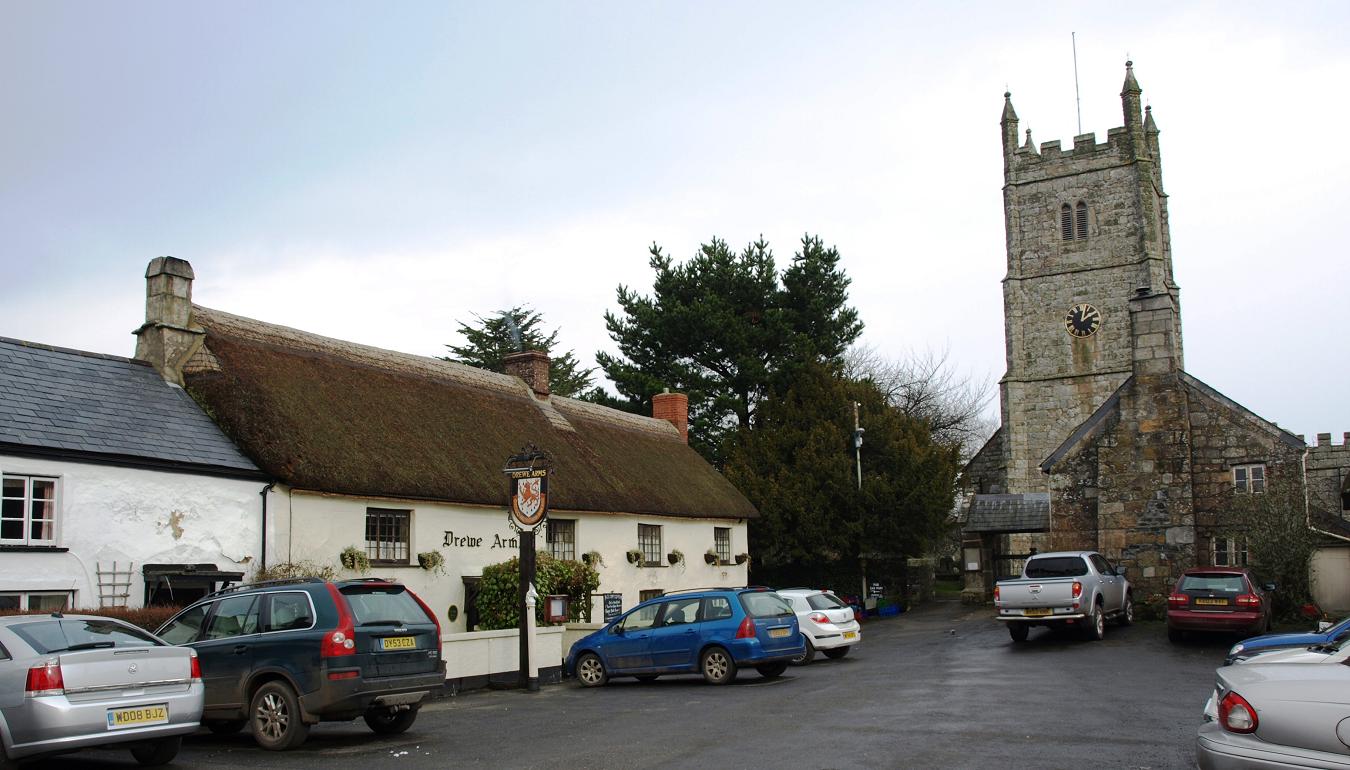 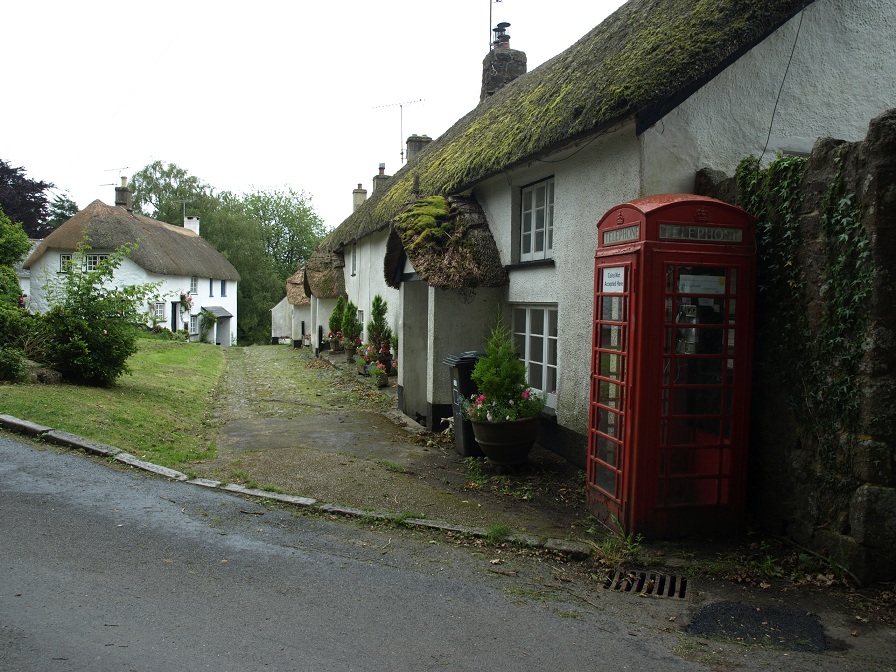 Cottages next to the village green, North Bovey (July 2012)

About 60% of the land in the Teign catchment is used for agricultural purposes, with beef cattle and lamb production the main activities.

Other notable features within the Teign valley are Canonteign Falls, Fingle Bridge and Castle Drogo. Canonteign is England’s highest waterfall, cascading 220 feet down a gorge into the Teign. 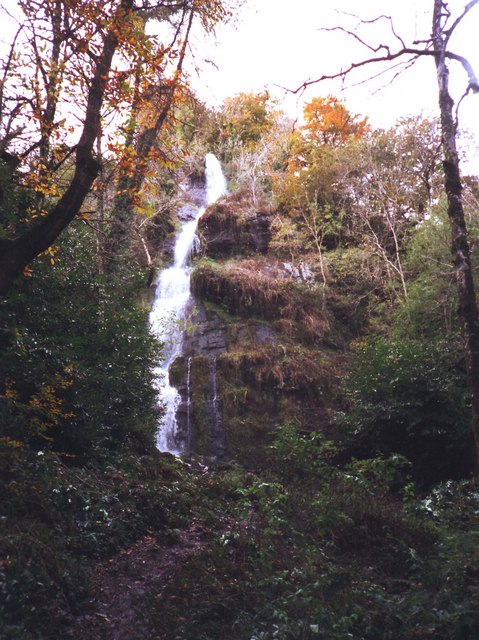 The 16th century Fingle Bridge between Drewsteignton and Moretonhampstead used to be a major crossing point over the Teign, used for packhorse transport of corn and wood products. 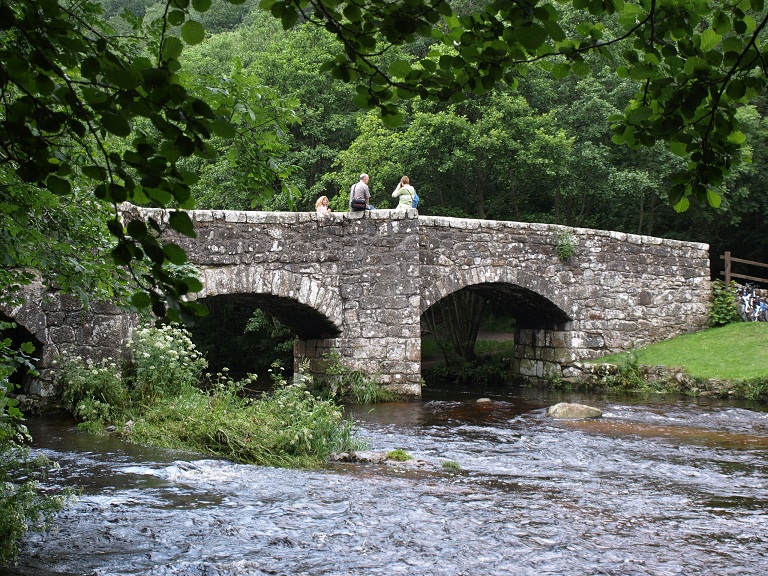 England’s most modern castle, Castle Drogo, built entirely of local granite between 1911 and 1930 to a design by Edward Lutyens, is situated on a prominent spur overlooking the Teign Gorge, near Drewsteignton. 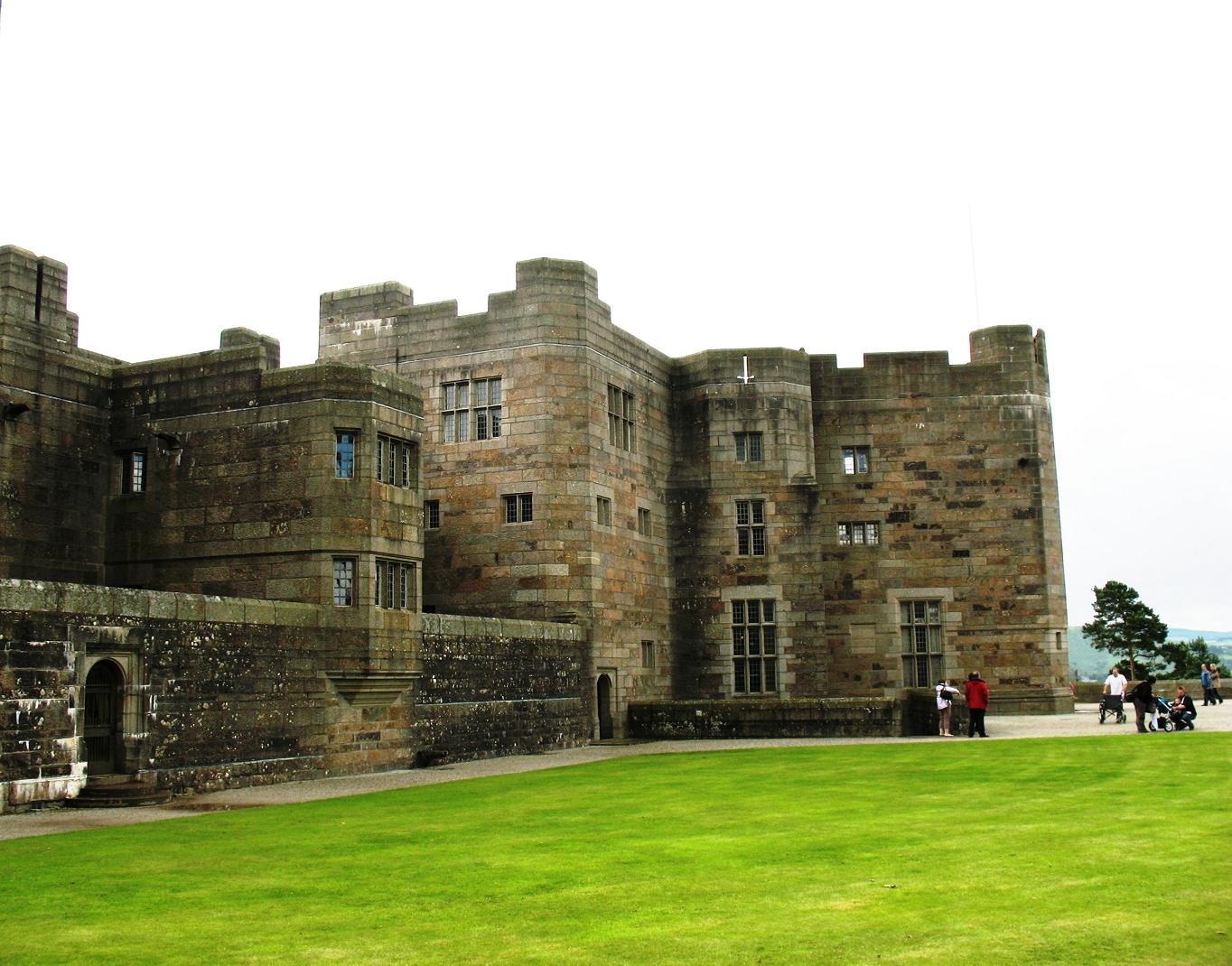